Back in March the City Planning Commission voted unanimously to make changes to the zoning code governing urban agriculture that would allow for residents in Pittsburgh to keep chickens, bees and goats on their properties. The proposed code still needed to be approved by City Council before it became law — and on July 7th it happened. 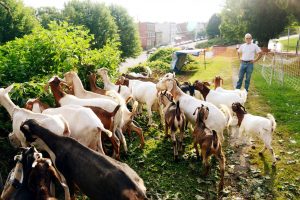 Image from the Post-Gazette

The new law makes it much easier and affordable for residents to obtain the permits needed to raise and keep these farming animals in the city. Under the old provisions the urban agriculture zoning laws cost people fees totaling upwards of $300 and could take up to 12 weeks to obtain a permit.  The updated law allows for people to obtain the necessary permits in one day and costs only $70.

Critics of the former bill said it wasn’t functional and that only 13 people successfully applied and were granted permits. There’s hope that these new provisions will cut down on illegal chicken coops — some estimates suggest there are 500-some in the city. The new law allows residents to have five chickens or ducks, or two dehorned goats, and two beehives providing their property is at least 2,000 square feet. If you have an additional 1,000 square feet, you’re allowed one additional chicken or duck but no additional goats if the property is less than 10,000 square feet. And you don’t have to worry about being woken up at the crack of dawn — roosters are not allowed.

We believe that these new provisions have been well thought out by many urban growers but we hope that people will understand the responsibilities that come with having chickens and other animals in the city. Rodents are an issue with raising chickens and with composting when done incorrectly. We hope that all participants understand how to engage in these activities in a way that will ensure the continued success of the program.

Fireman Creative thinks that this could be a great program in terms of providing eggs, produce, and honey to the underprivileged and to those who just appreciate locally-grown food. We see lots of potential opportunity for underserved communities resulting from this legislation and are excited to see where this can take our city.

Mayor Peduto still needs to sign this new bill before it’s official, and is expected to within the next few days.