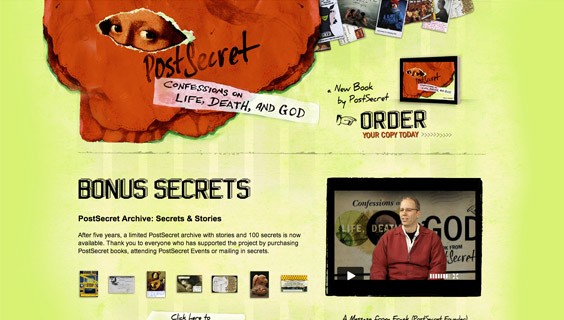 A Place to Unburden Yourself

Fireman Creative launched a website to announce Frank Warren’s new PostSecret book: “Confessions on Life, Death & God”. The new site was developed as a place for PostSecret readers to share their personal stories about how the PostSecret project has touched them. Readers submitted images and stories for inclusion in the book.

Our video work was featured in the PBS documentary, WQED: Experience, which profiled Frank Warren and his work.

A Lifetime of Secrets

As part of the promotional campaign for Frank Warren’s Postsecret: A Lifetime of Secrets, Fireman Creative produced, directed and shot a trailer which quickly garnered over a million views on YouTube.