Thanks to Brian Conway and Next Pittsburgh for writing this article about our new home!

The grandeur has been restored to a century-old Point Breeze firehouse.All it took was the work of a Fireman.Paul Fireman, of Fireman Creative, a web design and development agency, purchased the former Engine House No. 16 in summer 2015. After extensive renovations, he moved his company in on Leap Day, 2016, two days after the space hosted Quantum Theatre’s Q Ball.And before you ask, yes, that is his real name.“I think from the time I was a little kid I always wanted to have a firehouse,” says Fireman. “It was in the back of my head that that would be the coolest thing ever.”

The firm’s move completes the transformation a 19th-century structure into a state-of-the-art, zero-waste-producing, 21st-century workspace. 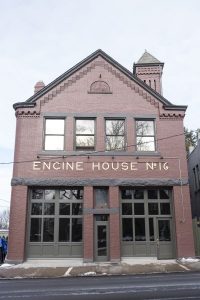 The firehouse, at the corner of Penn and Lang in North Point Breeze, was a working fire station until 1986, when it became a community-oriented police station. It stayed in that role for about 15 years and mostly spent the 2000s vacant until Fireman’s acquisition.

“When it was built, in 1889, it was really a crown jewel,” says Fireman. “I wanted to bring it back. It had been abandoned by the city for almost 20 years, and it was really falling into disrepair.”

Fireman says that over the years a number of changes were made that masked the building’s splendor. A side entrance was bricked over and a bathroom installed in the foyer. Hardwood floors were covered with linoleum. Drop ceilings obscured intricate cornices and 18-foot high ceilings.

“You had this whole facade of the building with these weird rusty air conditioners sticking out,” says Fireman. “Tearing them out was the most fun. That made me so happy.”

What couldn’t be salvaged pays homage to building’s history. A pair of decorative fire poles traverse the first two floors, and the large, checkered front windows were inspired by a photo of the original doors that appeared in the background of aPittsburgh Gazette-Times article in 1913 marking the occasion of the city’s first mechanical fire truck.

Fireman says that acquiring and reconstructing the building has taken him over two and a half years, from the public bidding process to gutting the 7,000-square-foot structure to completely revamping the interior. He is currently searching for a company to rent out the first floor; the remainder of the building will be occupied by Fireman Creative. 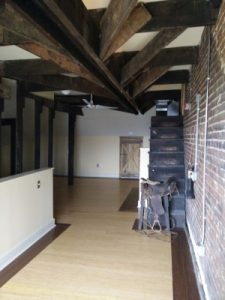 Photo by our very own, Patrick Burke

“The building, even though it was glorious, was under-appraised from our construction budget by a couple hundred thousand dollars,” he says. “The URA created some gap funding, to be able to make it happen, because the banks weren’t going to loan more than the appraisal, and the appraisal had this place at like, $460,000; we were borrowing $700,000.”

Before he finishes his tour of the building, Fireman stops to show off what might be his favorite room. It’s a bright, sunny nook in the former hay loft, with a chaise lounge that would be perfect for reading or a cat nap. The floor-to-ceiling window, bricked over for decades, now offers a stunning view of the neighborhood and the former Heinz and Westinghouse estates.