A Magical Day with Kim Harrison 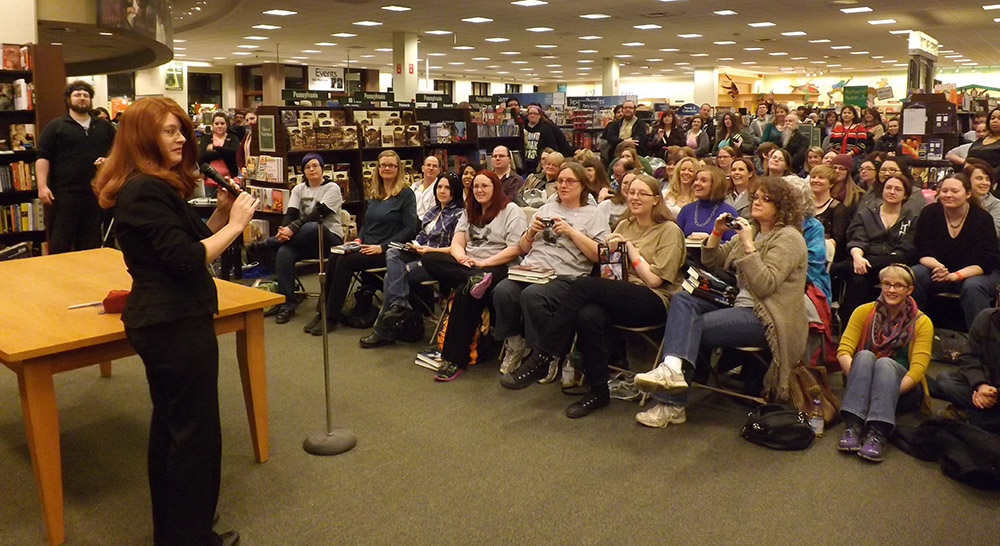 I was excited and a little nervous to escort fantasy writer Kim Harrison around Pittsburgh on Friday. Fireman Creative has worked on various book trailers and live streaming book signings with HarperCollins in the past, so when they told us that Kim Harrison was coming into town, we were excited to show her the city. The #1 New York Times bestselling author has a huge fan base and impressive book sales, both as Kim Harrison (her pen name) and Dawn Cook (her real name). I had never met a famous author before, and I was a bit intimidated. 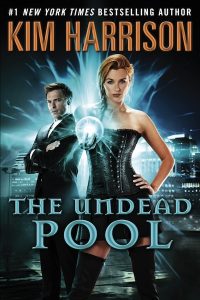 My fears were assuaged as soon as I met Kim and her husband Tim at the airport. Coffee and black tea in hand, both were exceedingly friendly and warm, despite the chilly temperature and admitted sleep deprivation. “We had a 4:30 wake up call!” Kim confided glumly.

Kim and Tim had two major events planned for the day: a tour of Google and a book signing at Barnes & Noble in the evening.

As we chatted in the car, I took advantage of hanging out with the author by asking her a few questions about her work. “I never plan out further than the book I’m working on,” Kim explained. Instead, she feels out where her characters and their stories are going and follows her gut. If something doesn’t feel right, she knows that the story should take another path. I asked what it’s like to hurt or kill off characters that she cares about. “Those chapters are hard to write,” she confessed. 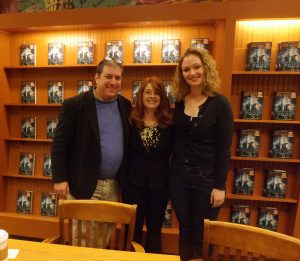 Because we had a few extra minutes before the couple’s tour of Google, I took Kim and Tim on a short tour of Pittsburgh. They oohed and aahed as we drove through Oakland and saw the Cathedral of Learning–“That’s one of the most beautiful buildings I’ve ever seen!” Kim exclaimed–and enjoyed Pittsburgh’s architecture. The couple loves houses, and they joked about buying a summer home in Pittsburgh.

The Google tour was fun, and Kim said that she came away from it with a new appreciation for her own work space, which, like Google’s, includes dogs, yoga, ergonomic desks and food less than 100 feet away. “I’ve got it so good, I forget that it’s not the norm!”

We live streamed the book signing on Vivo!

After the Google tour, we had a quick lunch during which we talked social media. “I love the PR aspect of my job,” Kim told me. And she’s good at it, too. Kim’s Facebook page has a not-too-shabby 83,000 likes, and she just participated in her first Reddit AMA. She spends two hours every day maintaining social media and her blog, The Drama Box, which includes a post from every book signing, complete with pictures of fans waiting in line (she even included one of me!).

Friday evening was the book signing. We arrived early so that Kim could get her microphone attached and working, and at 7 she walked out to greet the 125 fans who awaited her. Kim doesn’t get nervous before signings, just excited. Her energy was palpable as soon as she began talking about her latest book, The Undead Pool. When the Q&A began, it was apparent that she loves to connect with her fans–she answered questions for almost an hour, and then signed books for over two more. 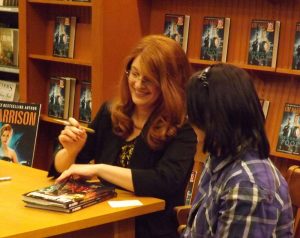 At 9:00, as I collapsed in a chair and watched the progress of the slow-moving line of fans, Kim continued to pose for pictures, chat with admirers and sign as many books as her fans wanted. Tim was busy socializing with fans, answering questions, taking pictures and passing out keepsakes from the event. They were truly a dynamic duo. How do they do it? I wondered to myself in exhaustion. “I really love my fans,” Kim confided.

After a three and a half hour book signing, Kim and Tim were pretty hungry. They divulged that their standard post-signing meal is an order of french fries with warm milk, then straight to bed.

I went home and slept in late, but when I checked Kim’s blog the next day, she had already written a post and uploaded photos of the Pittsburgh book signing! Seems like magic to me.